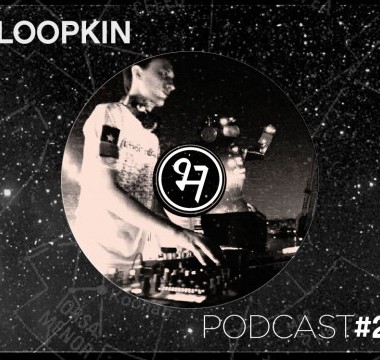 For 20 years, Loopkin has kept dancefloors heaving in anticipation. Acid- and Detroit-techno, heavy groove and classical roots – Loopkin’s influences run wild across three turntables, Direct Live and marathon sets. From his native Brittany to Bombay, Loopkin uses tunes to push spatial, temporal and visual boundaries – all at the service of the beat.

With this podcast, Loopkin’s giving you a glimpse inside his own personal spaceship, an intergalactic musical attic packed with sonic memorabilia. It’s a tribute to two decades of music from Jeff Mills and Convexion, Arpanet and Model 500, and more recently Mathew Johnson, The Mole and Luke Hess. Its also an invitation: listen closely and you’ll hear it. There’ll be some distortion, but if the signal comes through, then you’re already halfway to being on board.

So Forget techno, forget groove. This is a noise experiment, an experiment in time and space, in velocity and expectation. Don’t be surprised if the beat deceives you. You’ll feel time shift even as the bpm stays constant, you’ll hear sounds that are familiar and strange, you’ll feel things move in ways you don’t expect and take abrupt left turns into places you’ve never visited or haven’t been in years. It’s a black hole; it warps space, shifts time.

Get sucked in. Who knows where or when you’ll come out…