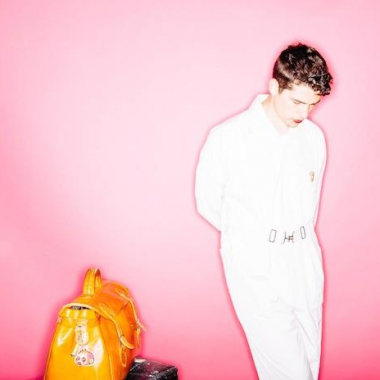 A Mating Call with Nick Monaco

We talk with Soul Clap’s endearing and effortlessly cool baby-faced protege, ahead of his performance at Wonderfruit Festival.

Round about the 2:33 mark during the video for the unplugged/un-clubbed version of Nick Monaco’s ‘Private Practice’ (below), it looks a lot like the singer has just started to thrust in and out of his Fender Rhodes. It’s without doubt the beginning of an irresistibly provocative part of this bedroom jam, an act that graciously follows two-and-a-half-minutes of tension (foreplay).

Next, you skip over to pretty much anything else by Nick Monaco that the YouTube gods recommend, and that hot, closed-doors, bent-over-the-couch, doubled-over-by-the-nightstand vibe is intact, punctuated by some fine melodies and intelligent, suggestive lyricism. It’s all part of a style of avant-garde, deep disco music that Nick can proudly look to call his own, and one that somehow fits right into the Soul Clap catalogue of music, representing the Boston label and collective, that since 2011, has consistently churned out sophisticated, heart-opening, panty-dropping club music to a generation of hungry and discerning party monsters.

Nick Monaco may seem like the Soul Clap crew’s most understated artist, one who has managed to avoid the underground and near-mainstream attention some of his peers at the label enjoy these days, but that’s about to change real soon. As we ease into 2015, there’s no doubt that the dance and the non-dance music world will look to people to that bridge this gap with taste and tactfulness, and we have a strong feeling Nick Monaco will be the kind of artist that many will look up to as the one that did it right, and importantly, did it his own way. Ahead of his upcoming live performance at the Wonderfruit Festival in Thailand (details), he gets down and dirty with us. Without further ado, Ladies and Gentlemen, meet Nick Monaco.

भ | Your Mating Call LP makes for perfect bedroom listening. Do people ever tell you it’s pretty much magical when used to woo a significant other?
YES! People have told me it’s a great album to have sex to, I’ll have to try it, but I’ve always felt like having sex to your own music is like the most narcissistic thing you can do, I know R. Kelly does it.

भ | Mating Call LP seems to have a lot of influences of punk music in the vocals and guitars. Are there any particular artists that may have been responsible for that?
I was listening to a lot of Talking Heads, Tom Tom Club, The Slits, and Arthur Russell when I was making the album so there’s a direct inspiration from that sound.

Preview ‘Freak Flag’ off Mating Call below, head over to Soul Clap’s YouTube channel to listen to the LP in its entirety; be a doll and buy it here.

भ | How did you end up being a part of the Soul Clap collective?
It began a few years ago when I sent a demo to Eli (Goldstein), he really believed in the music I was making but didn’t have an outlet to put it out. So they (Soul Clap) became my mentors, pushing me to move beyond just making house tracks and to cross genre boundaries. The relationship developed organically and I became part of the crew around when the Crew Love idea came to life; it all happened so organically.

भ | The ‘Festival Erotica’ collaboration with Wolf+Lamb and Russoul that released in October is markedly different from your individual work. The sounds seem all the more classic house. Is that a direction you wish to pursue sometime in the future?
Every record I make is inspired by what I’m feeling that moment I made it, I mean I definitely operate within the house world but I never feel bound by genre, I made punk and ska all summer (most of which will probably never see the light of day) but I just make what I’m feeling.

भ | So what’s the idea behind the stage get up with the lipstick and the jumpsuits?
I stumbled upon the jumpsuits at a shop in San Francisco (where I live) around the time I started performing live. I wanted to wear something different when I performed live to make it stand out from a DJ set, so I bought every jumpsuit they had and have been wearing them ever since. And if you’ve ever worn one they are really comfortable and airy.

The idea behind the lipstick is to pay homage to the queer roots of dance music. It’s a symbol of resistance to hyper-masculinity and alliance to the LGBT community who essentially founded modern dance music. I actually wear my own brand of lipstick, which is called Freak Flag, all of the proceeds help pay for gender-confirmation surgeries through an organization called The Jim Collins Foundation. You can read more about at nickmonaco.com/freakflag

भ | Is there a particular theme or a motif to all your music? Something you always keep at the back of your mind and follow through while working on all your tracks?
There seem to be themes that present themselves in my music whether I realize them at the time I’m creating or not. Sometimes I don’t realize there was a cohesive theme until I listen to the music later. For example, there is a lot of childish innocence in my early music, and then there’s a lot of sexuality in stuff like ‘The Stalker’, and in my most recent stuff there seem to be an obsession with femininity and playing with ideas of gender.

भ | Ever had any crazy fan/fans stalk you after your live gigs?
I definitely have one stalker figure that I’m aware of and I’m afraid that if I describe this person that they are going to read this and kill me and wear my skin or something so I guess I’ll leave it at that?

Watch ‘The Stalker’ (or rather, watch him watch you)

भ | Your music sensibilities seem to be far from mainstream. How do you hunt for music?
A lot of it falls in my lap. The crew shares a lot of music with each other and the other stuff I come across along my travels. I wish I had more time to go digging. That used to be a big part of my life that I haven’t done in awhile.

भ | Is the Nick in the studio very different from the Nick outside the studio?
That’s an interesting question, I think my inner child comes out when I’m in the studio, all my engines start firing and I get this crazy burst of energy when I’m making new music, it’s really addicting actually. Outside of the studio, I appreciate silence and am more reserved.

भ | If you had to pick one song of your own over the others, which one would it be?
Nobody paid attention to it, but I made a song called ‘Opposite Sex’ on Naked Is My Nature (my first EP on Soul Clap Records) that I totally forgot about myself. I’m not saying it’s my best work, but I think there’s so much depth and rawness to it.

Listen to ‘Opposite Sex’ below.

भ | Your earlier work has shown equal influences of house, hip-hop and funk. Any new artists on the block that you would like to work with in the future?
I would love to work with Life On Planets, Kindness, Spencer Owen, and Rhye.

भ | Any pre-show rituals?
I usually do a shot of tequila and pop a Ricola in my mouth (still waiting for a sponsorship there).

Follow Nick Monaco on Facebook, Soundcloud and Twitter. Catch him live at Wonderfruit Festival this December 19 – 21 in Chon Buri, Thailand. And check out our interview section here, for more conversations with cutting-edge musicians from around the world.