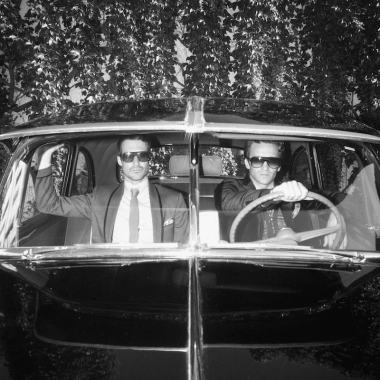 We talk Your Darkness, The Beatles, indie rock and more ahead of their show at Luna Terrace in Galle.

Washington DC duo Benoit & Sergio are a musical anomaly of-sorts. In just over handful of years, they’ve gone from having regular jobs to becoming this underground-dance-future-pop hit machine with releases across the spectrum of modern music. Back in 2011, when the distant, melancholic ‘Let Me Count The Ways’ exploded on Spectral Sound, ears perked up everywhere. A year later, when ‘Principles’ dropped on James Murphy’s DFA, the indie dance kids hailed them as the “LCD After LCD”. Then came the “My baby does K all day, doesn’t wash her hair, doesn’t wash her clothes” line permeating ‘Walk And Talk’ on Visionquest, an instant club hit that found Benoit & Sergio even more favour among some of the world’s top DJs. More hits followed on Boy Trouble (DFA), New Ships (Visionquest) and Bridge So Far (Hot Creations), and the trip hasn’t really slowed down much. They have a neat, in-demand live show as well – stood behind those synthesisers, Benoit & Sergio bring a lot of classic Franco-American-by-way-of-Berlin style to the party, some cheek too, and a whole lot of heart. This week, ahead of their debut live show in Sri Lanka, Benjamin Myers aka Sergio helps us peel more layers off.

भ | Are you excited to play in Sri Lanka? What’s the best thing about traveling to far away lands like these for shows? Do you guys tend to get nervous playing out to new audiences?
S | Very excited to play in Sri Lanka— not nervous. Grateful. The best thing about playing these shows in far away places is to learn more about people from different places and to realize that, at least in this scene, you can make friends all around the world.

भ | Assuming you are still huge fans of indie rock music, what’s the number one song right now for each of you? And your favourite albums?
S | ‘My Revolutionary Mind‘ by Farrar, Johnson, Parker, and Yames off the New Multitudes tribute album to Woody Guthrie. ‘Imperial Motors‘ by this way-ahead-of-its-time band called Lives of Angels. This track sort of blows my mind that it came out over 30 years ago. The whole album – Elevator To Eden – is magnificent. And the album that has meant the most this year would be Lost In The Dream by The War On Drugs.

भ | Would you be kind enough to name some of your most cherished songwriters and lyricists, authors and poets?
S | Ted Kooser is the like the Beatles of poetry – everyone of his poems has like three great hooks/lines/thoughts/images. He lives in Nebraska and writes about the Midwest and sad towns and landscapes. And all his poems are short, full of magic—like Beatles jams.

Speaking of The Beatles, it’s sort of shocking to realize, after years of not hearing it, that ‘Eleanor Rigby‘ is barely two minutes long. It has more music and says more with less than any other song ever written. So, yeah, in terms of songwriting, the lyrics to ‘Eleanor Rigby’ are an object lesson in mastery.

Eleanor Rigby
died in the church
and was buried along with her name
Nobody came.
Father McKenzie
wiping the dirt from his hands
as he walks from the grave
No one was saved.

भ | In 2011, you put out a a slow, funky cover of Daft Punk’s ‘Around The World’; there was also this Metronomy remix. Have you thought about covering another anthem-ish tune lately?
S | Well, just thinking about it now, a mash up of ‘Easy Lee‘ and ‘Dexter‘ by Ricardo Villalobos would be pretty amazing. I’d like to hear that. It’s time for those tracks to come back, if they every really went away.

भ | What’s planned in terms of new releases in the future?
S | We are finishing up a big EP for our friend Andre on Culprit that will be out in January. It’s called That’s The Party Talking. Excited about this one. Big dance jams.

भ | What do you both spend time doing when you aren’t in the studio or out on tour?
S | We think about music and touring, among other things.

[Editor’s Note] – Sergio once joked to Pitchfork that “it’s very hard to turn the party down. Even when I’m 70, I’ll probably be showing up to the after-party in sunglasses, Karl Lagerfeld-style. I’ll be the creepy old man at the party.”

भ | Some years ago, in an interview with fabric london, you spoke of “slower music/tempos – a kind of antidote to the bewildering acceleration of so much else in the music world”. What’s your take on that today?
S | It’s crazy to think that the fabric interview was years ago now. Talk about acceleration. Anyhow. Of course, the music world is all about changing quickly, so even the trend of slowing down was just part of the larger cycle of speeding up that characterizes this world. When that was written in 2011, Nicolas Jaar, who was playing 95 BPM, was still doing shows at Fabric. Tale of Us was playing pop music. Maceo Plex was doing his slow-ish sex jams. Hot Creations had that slower sunshine vibe. Now Nico (Jaar) plays concert halls, Tale of Us plays darker and harder stuff, as does Maceo Plex. Jamie Jones plays more jacking house. The scene has definitely moved on from that moment.

Benoit & Sergio play live at Luna Terrace at the Closenberg Hotel in Galle, Sri Lanka on Saturday, October 18 with support from our very own M.MAT. Details here. Connect with Benoit & Sergio on Facebook | Soundcloud. Stay tuned for their #WeeklyCutz playlist, coming soon.