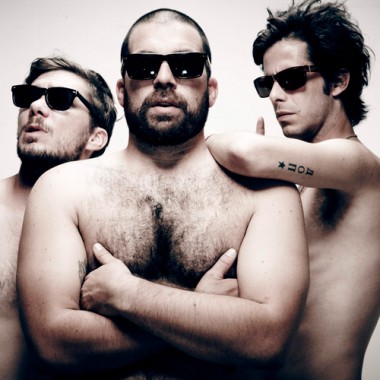 Rule (or suggestion) #1: Don’t call the songs ‘tracks’. Made up of Damian Van de Sande, Clement Zemstov and Jonathan Illel, dOP draws from a crazy grab-bag of influences to generate the buzzingest, craziest, most debauched party nights this…

Rule (or suggestion) #1: Don’t call the songs ‘tracks’. Made up of Damian Van de Sande, Clement Zemstov and Jonathan Illel, dOP draws from a crazy grab-bag of influences to generate the buzzingest, craziest, most debauched party nights this side of 1925. From American beat poetry to Malian instrumentalists, to jazz and funk and rock and pretty much whatever else, dOP defies genre or style in the name of a killer beat and a better party.

“Sometimes you visit the market, you don’t always get all the ingredients you want. There might be fresh fruit, some herbs, you have some spices at home,” says Damien. “You mix it all up to the best of your ability and it’s the tastiest thing you’ve tasted.” That about as close to a good description of dOP as we’ve ever seen. The three guys played their first disastrous gig together at the age of 12 at an event quaintly called Music Day held at a local restaurant in the Paris neighbourhood where they all grew up. “Our friends and relative were all there and the gig was totally shit,” Clement recalls. “We froze on stage. There was no mood, no vibe, nothing!” They learned their lesson. They dOP guys have spent decades together forging a musical sound all their own through shared references and interests and a comfort with experimentation that comes, in part, from an intuitive understanding of each other. The sound has evolved since then – which is to say, it’s become a sound – but in a lot of ways, these guys proudly remain the most analogue kids on the plug. In an interview with Resident Advisor back in 2008, dOP famously claimed to have only five Pro Tools plug-ins – the five that came with the software. If most of the world’s top DJs rely heavily on fresh technology and canned sounds, dOP keeps their sound soulful by incorporating flutes, horns and live percussion. It’s all in the mix, the variety, the possibility of total surprise that keeps you hanging on for more.

The dOP keep things mixed for themselves by alternating between wild live gigs and more controlled time in the recording studio. In fact, while dOP may have become legendary for their mad live performances, it was a series of 12-inches and EPs released in 2008 that first brought them notoriety, and they’ve seen music released on some of the industry’s biggest labels, including Circus Company, Milnormodern, Eklo and Orac.   These days, the dOP guys make their home in Berlin, where they get to sample a whole new range of influences from the other DJs and musicians that have turned Berlin into the world’s musical (and, of course, party) capital. “We have a studio in the same building as that of Club Renate in the Freidrichshain area of East Berlin”, Clement told us. According to Damien, “East Berlin reminds us of home” – except with better parties, more musicians, less stress and better quality of life.

Those parties – whether in Berlin or basically anyplace else on earth – are still a driving force behind dOP’s sonic growth as the trio churn out new, better, different ways to whip a crowd into a frenzy. “As musicians, you constantly evolve in your sound and that holds true for your live act as well,” Clement says. “There are always elements you are looking to tweak for better effect.”

Ravel's Bolero
An incredible version of the classic bolero from 1979 with arrangements that are typical of Philadelphia.

I'll be around
AA beautiful cover of the massive Spinners cut I'll Be Around, which was originally recorded in the legendary Studio one studio by Clement âCoxsone Dodd, Otis Gayle's version is just as soulful with a fantastic organ solo too.

Miss You (dOP remix)
An extract of our new remix, coming out on Catz'n Dogz label, Pet's Recording, We like to finish our sets with it right now. It releases this week.