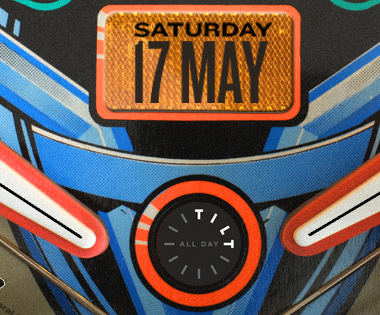 DJ Loopkin, DJ/Producer, plays very groovy, funky and dynamic, electro – techno music.
Rising from Brittany (France), he started mixing acid-techno in 1995. He discovered the techno from Detroit after listening to the “mix-up” of jeff mills – a discovery that was set to turn his life upside down.
In 1995, Loopkin set up with his best DJ friend, his first Label CSI.
They begin to be well known in Brittany thanks to the radio show “Line-Up’” where they played regularly from 1995 to 1997. At the time Loopkin started to play all over France with international DJ’S like The Youngsters (f.com, Fr), Stryke (Guidance USA), Steve Bicknell (Cosmic, UK), Laurent Garnier (F com, Fr).

In 2001 he started playing regularly in India (Delhi, Mumbai, Goa, Calcutta, Bangalore) and in 2004 he joins Bhavishyavani (Future Soundz).

Since then he has played all over India, France and few places in Asia.

Bullzeye is Siddhanth Kapoor’s Techno project.
Biography:
He started DJ’ing in 1999 at the age of 16 under the influence of Sasha, Paul Oakenfold, Bedrock, Siddhanth blasted many clubs in Mumbai with his tunes. PLayed in leading nightclubs like Fire and ICE and Mikanos in Mumbai, his love for Techno always remians strong. His new project, ‘Bullzeye’ is to look out for heavily. Clubs these days like Blue Frog and Aurus have witnessed his journey of sound with great appreciation. A mix of all forms of Techno and House sounds, his sets are to watch out for.