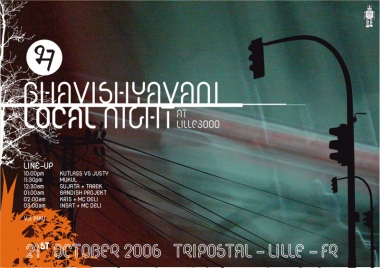 The Bhavishyavani Crew heads to north of France for the Lille 3000 festival . WE bring with us some Bombay electro masala with the full crew but also couple of guest artists and good friends

We and our Bombay Robots take off over the old post office of Lille, Tri Postal for a memorable party

Constantly touring across the country , from beach parties in Psychedelic Goa to the Underground revolution that was taking place in major cities such as Mumbai, Delhi and Bangalore, Dj Uri has become a household name within the scene. He played at the Lille3000 festival in France, The Panegea Festival in Manchester (UK), The Bass Festival, Leicester (UK). His signature sets came to be known as a rich fusion of Classical Indian, Middle Eastern, Ethnic and Tribal sounds with 21st Century Electronic Music. Watch him scratch his vinyls at the Park Hotel (Bangalore).

Bandish’ in its Indian classical connotation means “composition”, while Projekt reflects its innate extermination. Like a creeper and a tree, the music is the symbiotic conjoining of the sounds folk music fused with electronic or classical Indian ragas entwined into trio hop all done live, BANDISH PROJEKT fuses melodies of yore with IDM to create havoc on the dancefloor at Dulbin(Chennai).