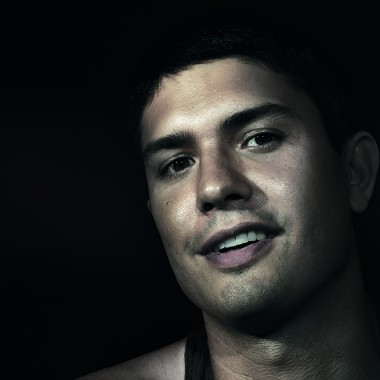 We had the privilege of having a few words with Heartthrob before his performance this Sunday the 15th at the Aurus Sundown.

Your dad owned an independent record shop. Tell us about growing up there and some of your favorite records from the time.
My father’s cousin who owned the record store. It was in Saginaw Michigan. We would visit quite often. I remember first seeing a poster of Prince wearing a bikini in the shower and thinking it was really crazy. I also heard Kraftwerk and lots of funk and reggae music. It was a very urban scene. I would have to say that Tour De France by Kraftwerk and Dirty  Mind by Prince were my favorite records of that time. I think I really got into the synthesizer sounds and drum machines used on those albums.

How did you bump into and befriend Magda and Troy Pearce in New York? How much different was your experience in the city compared to your time in the mid-west and Michigan?
I met Magda many years ago when she was playing at a club called Flamingo East. It was before she moved to the city. I knew right away that her sound was up my alley. She introduced me to Troy shortly after. Growing up in Michigan was nice, but New York had the energy and mixtures of culture I was looking for. I feel like I grew up quite a bit in NYC. It was a terrific city to live in.

How tough was it balancing work as a press agent and doing music for eight years in New York?
It was rough to find the time to balance my job and making music. New York is a fast city that devours your time and energy. I would often wake up extra early to work on music before work and stay up late into the evening. I loved my PR job though. It was a very dynamic and interesting way to make a living. Everyday was a bit different.

You moved to another big city in Paris. What was it like moving to Europe? Did it help that your boyfriend was already there?

Moving to Europe to work on music and focus on touring was the step after New York. I did move with someone, which helped make the experience a bit less nerve-racking. Relocating to a foreign country can be very stressful, but with a partner it can be more of a shared experience. And in a city like Paris it can be easy to feel alone when you don’t speak the language.

What’s it like living in Berlin now? People are always complaining about the city getting expensive and losing its unique charm. Do you feel like an outsider-insider there?
Berlin is still inexpensive compared to other European capitols. I find it very pleasant and livable most of the time. Though winters are a bit too long and gloomy for me. Overall, the people tend to be friendly and down to earth. Berlin is still a magnet for artists from all over the world. It seems the native citizens are happy to accept them, even if rents are going up. Because I spend so much time on my own in my studio and not working in a collective, Berlin can be a bit isolated-but that is just the nature of working alone.

Do you feel any pressure on having a certain kind of sound on M_nus? Tell about your label and how did you come up with the name for it?
I suppose I did at first. That was almost 10 years ago. I learned its best to let the ideas flow and recognize what ideas can stand as your own. I don’t want to sound like anyone else. I think my label ISNISNT is the right breading ground for unique sounds. The name is sort of arbitrary. Just something I made up that makes me laugh.

What kind of set can audiences in Bombay expect?
Really fun party music in the house and techno spheres!

And lastly, who is your current Heartthrob?
My border terrier Chim!

Catch him this Sunday the 15th of December at the Aurus Sundown !