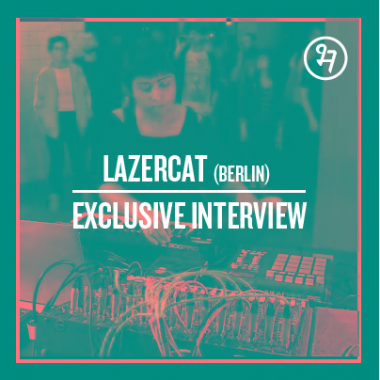 Berlin cosmic disco queen-in-waiting talks shop and more with us after her live-set BHA Podcast.

A fetishism for space-y ’80s sounds propelled by the urgency of Detroit techno led us to the feline fatale known only as Lazercat. Quality releases like ‘Dreamscape City’ (listen), her Heartbeat Lovestruck EP on Spirit Soul (buy here), and her upcoming Vector Dance EP only served to endear her to us before we were wired together, cosmically and electronically. Last Friday, she sent us an exclusive live set for BHA Podcast #06, and today, we’re in conversation. Check out some of what Lazercat is about below.

भ | Hello kitty. Who are you and what planet are you from?
LC |  I landed on Earth as a kitten and grew up in Calgary, Canada – a cold, sprawling city with an impressive view of the mountains. Around 3 years ago, I decided to move to Berlin, where I’ve been based ever since. I feel more at home here than I have anywhere else.

भ | Can you tell us about your introduction to electronic music?
LC |  At one point, I realized I could identify more with electronic music than with anything else I had heard before, particularly pop or rock music. Electronic music was still seen by the mainstream crowd back then as a strange sort of non-music, which only added to its appeal for me.

भ | What did you grow up listening to?
LC |  I studied classical violin and piano throughout my childhood, but oddly enough, I never gave much thought to actively listening to any music beyond that until my teens.

भ | How did you land up making space disco beats, and is this the style that pretty much defines you now?
LC |  Through exploring various different styles of music, I discovered that ’80s-influenced disco was my favourite, so I simply decided to start making my own music in that style. I’m not sure if space-disco really defines me though, as I often incorporate many other styles in my tracks and am constantly seeking out new sounds and influences.

भ | Your Boiler Room live-set is great! It’s paced really well and definitely a journey and a story. Does that style of arrangement come naturally to you most times? Or are you the kind that writes a story beforehand and tells it in a way that’s best suited for the situation at hand?
LC |  I plan ahead for every live-set – it takes a lot of the sloppiness out, I find. I do a lot of things live as well, such as playing keys, tweaking various parameters, triggering oneshots and fills and so on. I’d die of boredom if I just stood there and pressed play.

भ | Also, How did that gig come about? Whose leg does a kitty have to climb up to get featured on Boiler Room Berlin?
LC |  The same way as any other gig would come about – by putting my work online and by already having played a few gigs around Berlin.

भ | Can you tell us about 5 records that impacted your life in some way?
LC |  Juno Reactor – Transmissions, Miss Kittin & The Hacker – First Album, Kraftwerk – Computerworld, Model 500 – No UFO’s, Lime – Angel Eyes

It was initially early Goa-trance that got me into electronic music. I was pleasantly surprised at how melodic and dreamy it sounded, especially after having been convinced that electronic music was mindless and repetitive. This was also around the time when electroclash was a fad, so I ended up listening to artists such as Miss Kittin & The Hacker, which made me discover my love especially for ’80s-inspired synth sounds.

Hearing Kraftwerk for the first time had the biggest impact on my life. I had never so clearly experienced a vision of the future from bygone days than I did then. The 3 albums they produced between 1977 and 1981 – Trans Europe Express, The Man Machine and Computerworld – were a huge influence on me. I went at least a couple of months listening to almost nothing else at one point, but eventually decided to explore further into the world of ’80s electronic music. This led me to discover genres like Italo disco and early Detroit electro, which still influence me to this day.

भ | What’s in the arsenal right now when you play live? And what’s on your wish list?
LC |  I use a laptop, FL Studio and MIDI controllers for sequencing, loop-triggering and live solos. I have toyed around a bit with some external gear though and I’m open to the possibility of using a piece or two in a future live-set at some point.

भ | Ever plan on touring this side of the world at all? Do you have any connections here in India?
LC |  No plans yet, but it would definitely be interesting to experience the scene in India someday.

भ | What’s coming up after the Vector Dance EP? (preview here, listen to the dreamy, supremely cosmic ‘Nova’ off the EP below)
LC |  Thanks. At the moment I’m working on two remixes which should be out sometime early next year. I also have a few more EPs planned, including some under different names which I won’t reveal just yet.