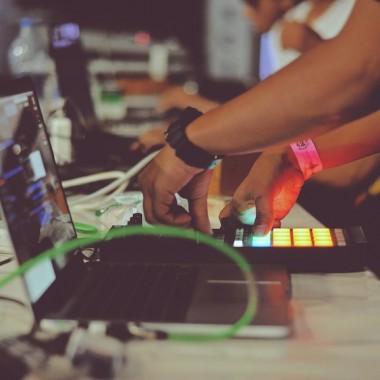 … the young video editor / motion graphics artist who’s been adding dimensions to the craft of the visual jockey and developing a signature style.

It’s taken a fair while to get Oblique to answer these questions. Our last interaction involved the re-telling of a joke he’d recently been the subject of. Just a week ago at a concert – he now finds himself traveling to quite a few – he was asked if he’s really into Slash. He admitted that it even took him a few seconds to get it. Our penultimate meeting was brief, by the corner of the FOH at an auditorium show as he jumped around punching buttons and adjusting faders on his Traktor controller, part of his live-visuals act that’s been on tour recently with twilight pop artist Your Chin, and music producer SICKFLIP. He did answer our questions, eventually, in depth. Here’s our exclusive interview with the man now known as Oblique, interspersed with work that has inspired his own journey as an artist.

भ | Who are you? What planet are you from?
/ | Hello! I’m Sourya (pronounced Show-Oor-Joe). I’m also known as ayruos on the internet and more recently, I’ve been Oblique at gigs doing live visuals under that avatar. Planet – Earth. Boring, yes, but earth has everything, and probably a bit too much of some things.

भ | Can you explain why you chose that name?
/ | Lol. This is a funny one. Oblique came up quite by accident. You know the squiggly key next to the numeric 1 on the keyboard? It’s called an acute, but for some reason I always thought it was called oblique. That key makes softwares like After Effects go full-screen – and I was projecting things on a bigger surface so I thought that’ll be a nice geeky humour to play with. Later I figured oblique is “/” and not “~”. But by that time I’d quite started to like oblique – so it stuck!

भ | What drew you to mapping visuals for music?
/ | So I’ve been working as an video editor and motion graphics artist for some time. While editing music videos and making effects and motion graphics there was a time when I was feeling a little constricted in terms of the material I was developing. Most were single-use for a particular video or project and I could imagine it having multiple uses and/or being able to tweak them further and further on-the-fly. At the same time I was also working on a project called #WeekendProjects where I was experimenting with videos for fun. This led to a music video for Your Chin (watch here). Shortly after, Raxit aka Your Chin asked me to develop visuals for his live setup and that’s how it went from feeling the need to do more with video to finally doing something with it live.

भ | Tell us a little about some recent work you’ve done.
/ | I’m not too old in this scene so I’d say everything is recent! I’ll list down three projects that I did over the last couple of months that have been great experiences.

Pettah Interchange 2014: This was where the name Oblique was born and this was a life changing experience. Being selected as part of the South Asian Visual Collective by the legendary Pfadfinderei, five of us were part of a workshop conducted by them in Colombo, that culminated in a a massive party where we did visuals and interactive installation. I was personally responsible for a light installation on one side of a seven-storey building which ran the whole night as a live graphic equaliser with the music being played at the Hotel Stage. I’ve spoken more extensively about it here, and you can watch the after-movie below.

LEE 125. This one was special because even though there were strict guidelines, there was enough scope to experiment and improvise. The gig was celebrating Lee’s 125 year anniversary through performances giving tribute to 5 different genres of music – Blues, Jazz, Reggae, Rock and Electronica. I created, curated and customised videos and loops with a distinct identity for each genre and worked with them live. It was good fun drawing inspiration from eras gone past and giving today’s spin to them. 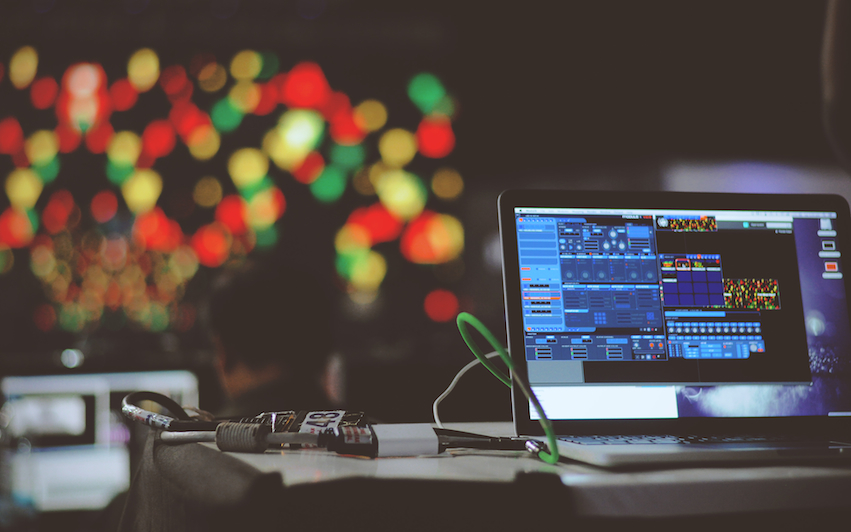 Oblique with the Reggae Rajahs at Lee 125. Photo by Rishabh Malhotra

The Ladakh Project: SICKFLIP’s new EP, The Ladakh Project (listen here), comprises tracks that he created while being in Ladakh and draws inspiration and sounds from the place itself. With that, The Outbox Project shot a lot of material with him. I got involved after the EP was done and they wanted to take the music and videos live to present this as an audio-visual experience. The rig I developed and mapped for this tour was based on the idea of showing the place at an micro level and also at an macro level – throwing up the videos in a full screen view as well as different magnifications for the same footage being used around. Over and above that, the whole evolution of the visuals tells a story of starting off slowly and then getting more and more immersive as the music progresses. 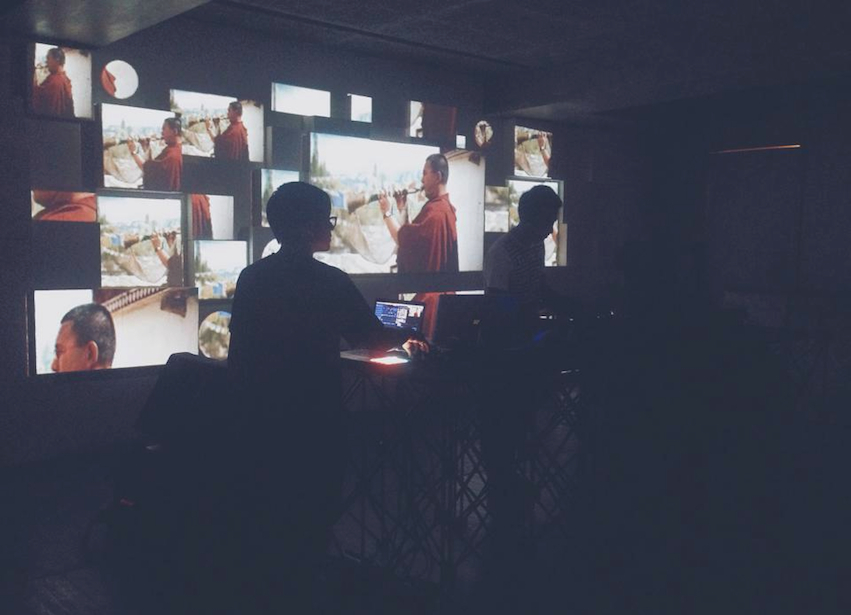 भ | What kind of equipment do you work with currently?
/ | I’m currently using a Macbook Pro with two softwares running simultaneously – Modul8 for the triggering and mixing of video loops and MadMapper – for mapping videos to surfaces or rigs. Also, this I’m controlling live with a Traktor F1 controller with a custom MIDI map programmed within Modul8. This is, of course, for the live work. For creating content, I use a mix of Premiere, Final Cut Pro, After Effects and Cinema 4D.

भ | What exactly are your hands doing behind the console?
/ | Having a blast! So thanks to the guys at Pfadfinderei, I have this custom plugin that they’ve developed for Modul8. This plugin simply divides any video loop into 12 different sections. So while making visuals, I tend to make a clip which is of the same theme but in exact 12 different section. With the help of the plugin, I can trigger any parts of the 12 at any point of the clip and only that part will keep looping. Add that to the fact is that I’m playing with 4 different layers of clips at the same time – so my hands behind the console are controlling the 4 faders for the 4 layers while simultaneously triggering different sections of the clips synchronised with the beats of the music playing out. So it gives me the freedom of being flexible while experimenting and evolving a live show. No two shows are ever the same even if I use the same clips.

/ Picks ‘Time’ by Pink Floyd. I recently heard it again after years and the lines “And then one day you find ten years have got behind you” made me realise that it HAS been ten years since I first heard the song (and which had gotten behind me) and it somehow left a mark that time flies and we need to get stuff done.

भ | What do you see as the evolution of your work? What is beyond mapping visuals to music for a projection mapping artist?
/ | Two words – generative visuals. This is a style where I don’t go to a show with pre-made clips but rather code and program visualising software to generate visuals depending on a combination of one or multiple input sources – like live music, proximity to objects, current lighting situations and more. Adding to this, live tweaking options – I feel this is the future of visuals. These can be and probably will be mapped and projected like other visuals but the production of the said visuals will be completely organic – based on a set of guidelines as code but completely dependent on live situations to evolve.

/  Picks ‘Getting Money With a Mouse and Wacom Pen (Fuck Comic Sans Fuck Papyrus, Too)’. Well, not really a great piece of music, but for a motion graphics artist this is gold. It talks about different techniques and what fonts to hate and the fact that you can make money doing this!

भ | Where do you look for and find inspiration?
/ | All video content that I see amounts to some inspiration. The bad stuff tells you what not to do and the good stuff tells you what kind of things work. I spend hours on Vimeo at times – their Staff Picks section is great to find inspiration from. Another great place is Art of the Title. Title sequences of films really nail it in terms of how to tell a story in a short period of time. I follow the work of some guys closely, the most important of them being Beeple aka Mike Winkelmann and lately have been listening to The Collective series of podcasts hosted by Ash Thorpe, another motion graphics genius.

I’ve been now also actively trying to draw inspiration from non video sources like architecture and art – even though I don’t understand any of them, sometimes a pattern or a colour palette gives rise to ideas. And music, of course. You sometimes just know what will work with a particular groove or a loop and how videos can evolve from the verse to the chorus to the bridge.