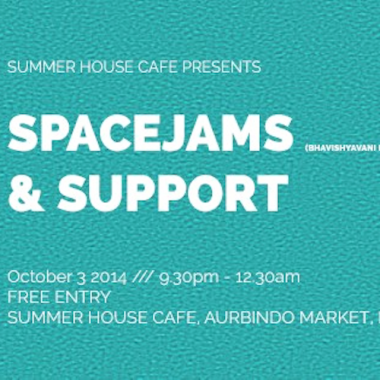 SpaceJams up North tearing it down.

If Bandra (West)’s walls could talk, once in a while, they’d amuse you with anecdotal information about a dark, tall, half human – half alien, disco jackin’ gent known around the block as SpaceJams. A mythical figure to most in the nation’s capital (and that’s a darned shame), SpaceJams is famous all around for his extensive knowledge of GFDM*, free of the shackles of genre bondage, and for being the first man on the floor in the club and the last alien being left standing at the end.

A purveyor of fine beats, finer women and the real underground sound, SpaceJams will make the ascent to New Delhi this Friday to work the decks at Summer House Cafe in Aurobindo Market (near Hauz Khas Village).

He’ll be supported by DJ/producer Sanil Sudan bka Alter State who’s planning on bringing the hot and heavy himself.

Entry won’t cost you a thing. The show kicks off at 9pm. Details and RSVP here.