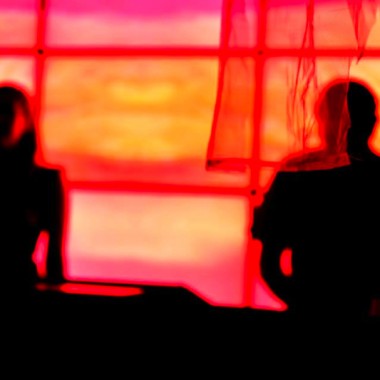 “I’ve washed dishes, cut vegetables in a vegan restaurant, worn a sandwich board, dug ditches, done demolition, and changed light bulbs (really, in office towers, neon bulbs), wandered around cubicles on drywall stilts, cleaned blinds and toilets, DJed rock for yuppies, bicycle-couriered in Montreal (I’m talking -20 degrees in the winter on a bike), been an archivist, worked for gangsters (I won’t go into detail because they always get mad at me when I do), bartended (I still enjoy that one), busboy-ed (I still hate that one), waited tables, looked for gold (seriously, I was a prospector flying around northern British Columbia in a helicopter, looking for gold). Frighteningly, this is only a partial list. My last job was a good one, I was a technician in the music department of Concordia University. That was very rewarding, seeing the students evolve. Later in life, I hope to be a hand model.”

For now, though, Montreal native Colin de la Plante is content to be The Mole, one of our favourite DJs on the circuit today. Another great act now based out of Berlin, The Mole brings a kind of effervescent fun to his music that, as it turns out, is basically in-born. His enthusiasm for the sound and feel of his adopted hometown extends from techno tourism (“the tourists are making it happen, greasing the wheels with their energy and love,” he says, no matter what the naysayers might think) to Polish swing music.

In his most recent visit to India, de la Plante came along with one of Berlin’s most distinctive voices, Elif Biçer, whose own career has moved seamlessly from a background in hip hop and r&b, through jazz to her current position as one of the most sought after vocalists in Berlin’s electronic scene.

Biçer had her first ‘gig’ somewhere around the age of 12, performing ‘We Are the World’ in grade school. Since then, a varied career has brought her into contact with famed German jazz musician Sven Helbig and Berlin-based hip hop label Ostblockk Plattenbau. In 2006, a spontaneous jam with producer-DJ duo Prosumer and Murat Tepeli brought Biçer into the electronic fold. “It is different to work with someone who plays several instruments and has studied composition,” Biçer told us. “Most of the producers who work in electronic music use the voice as an additional instrument. They cut it, sample it and pitch it till it fits what they have produced.”

In performance with The Mole, though, Biçer riffs freely over eclectic mixes that veer from house to techno to disco, drawing on a totally unique range of musical and stylistic referents. “Digging [for vinyl] in Berlin is totally different from Montreal,” de la Plante says, bringing him into contact with sounds and bands he may never have heard otherwise. “My sources have changed. One of my last edits for the 7 Inches of Love label was a Hungarian progressive rock band. I doubt I would have found that in Montreal.”

But the style that got The Mole to his Berlin burrow hasn’t changed dramatically. “The samples may be a Polish swing band instead of Jimmy Bo Horne now, but the chops are the same,” he says. “I think the biggest change in my sound has [come from] sharing a studio with Mathew Jonson. The amount and quality of synth in my music has skyrocketed since then.”

Most recently, The Mole has launched his own label, Maybe Tomorrow, named for The Littlest Hobo, a series from de la Plante’s childhood about a homeless German Shepherd wandering around London helping people solve their problems, always thinking that maybe tomorrow he’ll settle down.

“Sometimes, that´s how I feel, like I’m wandering around, moving from town to town, helping people,” he says. “Except, I’m not solving problems, just helping by offering a moment to forget them.”

Horse With No Name
I remember hearing this song on the radio when I was a kid. It took me years to figure out who the band was or maybe it took me years to care enough to find out and remember. This was probably because this song was always around, almost ubiquitous, and so I took it for granted. It reminds me of summer somehow but I'm not sure why.

Only So Much Oil in the Ground
A song that is still relevant, I clearly remember it was the first full horn section funk band I'd heard, and I couldn't understand it. It was funky and so heavy. I was about 18 and the acid jazz thing was hitting my town in a nice way. DJs like John the Baptist and Tyger Dhula were killing the clubs (all with great names such as Souled Out, Funky Chicken, Bosshog's Dirty Dugout and House Party) with songs like this.

“
I feel silly writing anything about this song. It truly speaks for itself. This is a nice rehearsal version “ Marvin on his game, chilling on the couch. The clip is reported to be from the documentary, Searching Soul, which followed Marvin around Gelgium, when he was hiding out there, getting his shit together, building up his comeback. There are some more really great scenes in that documentary. It's definitely worth seeking out.

“
This song is another big one from the AM dial of my youth. You can still catch it on the Labour Day weekend specials in Canada. I read somewhere that it is one of the top 100 rock tunes of all time, pretty sure my mom couldn't sing along with it, but I can remember air guitaring to it.

“
The Meters New Orleans The Heaviest: I'm not sure what else I can say. We love these guys at my house. We absolutely love em.

“
I figured we should have a Grateful Dead song on here. I was telling Elif about them on the ride to get our visas for India. It always surprises me how many Europeans have never heard of the Dead, let alone the whole Deadhead scene.
BROWSE BY TAG:electronicelif bicerhouseinterviewliveplaylistthe mole
DATE: VENUE:
FACEBOOK
TWITTER
GOOGLE+