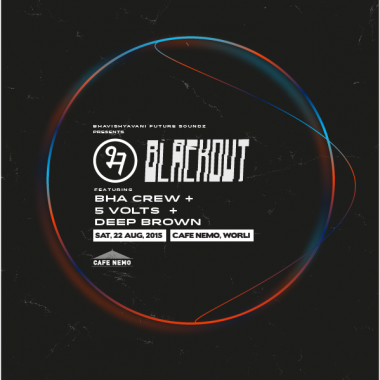 Read up on what the Kolkata boys are bringing to town for the next edition of BLACKOUT on Saturday, August 22nd.

Kolkata’s Deep Brown and 5volts head to Bombay this weekend to play their first Bhavishyavani show at BLACKOUT on Saturday, August 22nd. We caught up with them just before.

भ: Hey Deep Brown / 5volts. What’s been up lately?
Deep Brown: Hey guys, At the moment, just shuffling between the few monikers I have. On one end, I’m checking out new music for gigs, re-mapping my controllers for a different workflow of DJing. On the other end, I’m busy replying mails, programming acts/bands for a new night called ‘Mezzo’ where we’re promoting Electro-Acoustic, Indie Pop, Ethno Jazz, Electronica & other forms of interesting live music to a mid-week audience.

5volts: While Ankur’s been busy doing all that, I’ve been enjoying eating pasta and watching the new season of True Detective. It’s been a challenging week.

भ: Both of you spend a fair amount time in the studio, it seems. Are you making music as a team? When will the world get to hear some of these productions in the form of EPs, albums?
DB: I have been lagging behind here to be honest. I used to work on Logic until last year but sitting in front of a computer got a little boring for me and felt like a job, Hence the laziness. I’ve just started experimenting with hardware gear and I have to say, it’s mad fun, I love the workflow. At the moment I have three Korg Volca machines, the beats, bass and keys, but I’ll be getting more gear in the next few months.

Yes, we do jam occasionally and have had some amazing sounding sessions but most of it is impromptu. This is what needs to be fixed. When it comes to hardware I think there should be a good balance of spontaneous jams and disciplined recording sessions, and the end result will be something new.

5v: Wish I got into the studio more often however my workflow with analog gear has become more productive after ditching the computer. Even minutes on the synths means there’s productivity and you never know when things start flowing… 10 minutes later you have a complete track done. It’s instant inspiration!

Ankur and I already have a few hours of collaborative sessions recorded but nothing we’d want heard. We’ve been thinking about working on an analog deep house project but our jam sessions tend to go all over the place. It’s not as focused as opening up a DAW and working and reworking a particular style of music. It’s more like sitting around a campfire and strumming a guitar and singing whatever comes to your head. Just enjoying that for the time being till we get comfortable enough to bust out an EP over a weekend.

भ: What are you bringing along to Bombay for Saturday’s show?
DB: I’m bringing my regular setup. 4 channels on the Pioneer DJM 900 NXS, 2 NI X1 to control the decks, loops & effects, 1 F1 for sampling t the little white toy – Midi Fighter Twister, which is a 16-step drum sequencer offering 4 layers of digital drum sounds.

5v: A multi track sequencer, an analog drum machine, a monophonic synthesiser and an effects pedal. Haven’t figured out the specifics yet but I might be running that over a stripped down DJ set or just going totally off-road. Depends on the mood of the night.

भ. Do you have a bit of a set planned or are you gonna just wing it?
DB: For me its mostly on the fly, pre-planning sets are really boring. There’s always that moment on the floor where you suddenly realise you could drop that old tune, an all time favourite or some classic house tune and it would be perfect for the moment. You drop it and the party goes on to a whole different level. Creating those moments on pre-planned sets are impossible, You just don’t know what the vibe of the dance floor will be at that very point.

5v: Had given up many years ago trying to plan sets. Every time I tried something happened to screw things up, so I now go in with an open mind with only a few options to open/close with.

भ. A lot of people will be seeing you play for the first time in Bombay. Anything you’d like to let your audience know beforehand?
DB: Well, nothing really to be honest. The music should speak for itself. I’m just looking forward to the gig and spending some time with the crew. Judging by the stature of Bhavishyavani in the industry, I’m sure it’s going to be special.

5v: Film music from your city has plagued our clubs for years so we’re there for revenge. Expect some hardcore shit!

See you Saturday! Where? Here.