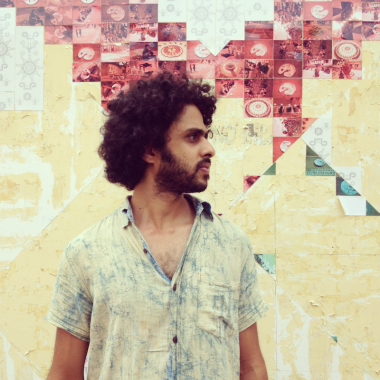 The Bombay producer talks his new EP, influences and gear. Also, a भ-exclusive video of an analogue synth jam.

Fuzzy Logic’s journey began somewhat right after listening to The Chemical Brothers’ Come With Us back in the year 2003. “The sweeping synth sounds and crazy arpeggios really took hold of me. I wanted to be able to make sounds like these but I had no idea where to begin.” he (real name Arfaaz Kagalwala) says. An active drummer in the seeming hey-days of Bangalore’s local band scene, Fuzzy first had the chance to meddle with audio software while interning at a studio in Bombay. The rest, according to him, is history. Propellerhead’s Reason was folded into the mix soon enough, and he started out to create a body of work that he eventually ended up not knowing what to do with. Some of it would turn into material for his disco/funk band Maximum Pudding, and most of the downtempo and alternative stuff made it into his electronic act Tempo Tantrick.

The Fuzzy Logic of 2014 is, however, quite different. In the decade that’s passed since, Kagalwala’s drawn from many different styles of electronic music, something that’s reflected in his bullishness when it comes to sticking with the variations of moods and textures that are coming to define his output as a producer today. In the last couple of years, under the Fuzzy Logic name, he’s released a club/dance EP titled Money Talks, and his latest Guerrilla Monsoon EP (preview below) is around the corner from a worldwide release this month. “The sound of Guerilla Monsoon is quite different from anything else I’ve put out. While Money Talks was clearly meant to be a straight-up dancefloor sound, something that I hadn’t done before, Guerilla Monsoon in contrast is more of a ‘smoke a little and dance at home while it pours outside’ kind of sound. There’s a sense of urgency in the beats, but the overall feeling is relaxed. There’s also a lot of use of sound scape and found-sounds in this new EP – I’ve experimented with long decay, tuned kick sounds for the low end and with sounds of insects, dripping water etc. replacing conventional high pitched instruments such as hi hats.” says Kagalwala.

Thematic undercurrents permeate all of Fuzzy Logic’s music and Guerrilla Monsoon is no different. Its title doesn’t give too much away in way of mood; Kagalwala puts it down to spending more time indoors during the rain, a time he reserves for reflection and creation. A sense of helplessness also crept through the music, because “there’s nothing you can do to stop the rain.” Fuzzy continues, “and the monsoon sneaks up on you and can be so destructive in its full fury, you almost feel like you’re in a war zone. It’s the duality of this season that I wanted to highlight with sound, and so Guerrilla Monsoon was born.”

Apart from the releases, Fuzzy Logic has been touring often, utilising multiple instruments, both digital and analog to create his signature live-vocal-DJ-sets that tour around the country. Currently though, he’s keeping things as simple as possible. “Since I began, I’ve actually cut down the number of instruments I would normally take to gigs. My current setup for my vocal DJ sets is mostly MIDI with Ableton Live + Launchpad (triggering clips, samples) + Novation Nocturn (configured to route effects to channels, cross fade and loop my voice). My vocals and Korg Monotribe (if I decide to take it along) go into my audio interface and that’s about it. I control all the levels myself so there’s no one but me to blame if the levels are all over the place. If I can’t hear myself or if I want something to be pushed up or down, I can do it all on the fly. I’m really looking forward to expanding my setup though. If I have my way, my new setup will feature all three Korg Volca synths (Beats, Bass, Keys), the Monotribe, mini Kaosspad as well as my MIDI rig and vocals all running in sync.” he says.

Check out Fuzzy Logic’s live synth jam for Bhavishyavani below using Korg’s trio of Volca synthesizers and a Korg Monotribe.