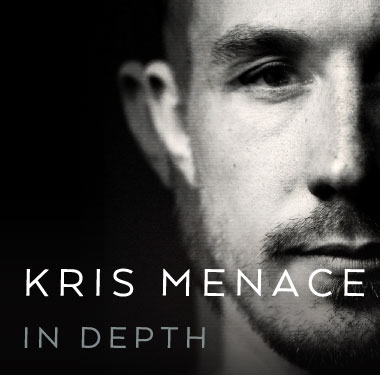 “I was very young, around 13 or 14 when I started to do music. I always wanted to create melodies and sounds.”

Innovation and versatility top the list here at Future Soundz, and few creators of electronic music have been as committed to the cause as Christoph Hoeffel. Born in 1980 in Landau, Germany, many fans of the mushrooming electro-disco-techno movements of the late ‘90s may know Hoeffel by one of his many monikers like Stars on 33, Menace, Love on Laser Disc, among others, but it’s his work as Kris Menace that’s seen the most widespread acclaim, partly in thanks to the exposure via 2005’s breakout ‘Discopolis’, a track he produced along with French touch dignitary Lifelike for Alax Braxe’s Vulture label. That was 10 years ago and a whole lot has transpired in the interim, some of which we touch upon today in our interview with one of electronic music’s most celebrated producers, incidentally right on the heels of a spanking new release with Vincent Honca that you can listen to just below.

भ | Kris, were you ever a fan of the show Miami Vice? To me, you are like the Don Johnson of the electronic music world.
Hahaha… I love Miami Vice and watched every episode! I’m a big fan of the ’80s!

भ | What are you doing right this very moment?
Spring finally arrived, so I’m sitting outside the office with my laptop, just enjoying our beloved sun!

भ | Do you get out much, like going to the clubs just to keep your ear on the ground of what’s going on these days?
I usually don’t or rarely go in clubs. I don’t like to get influenced too much from what others are doing. Most of the music finds me, so I don’t get too lost in looking for new music.

भ | You said in an interview in 2013 that you have “a feeling that people are a bit lost with DJs at the moment, because everybody is one.” Let’s assume that it still rings true to this day, which it does, do you think everybody wanting to be a DJ is detrimental to the global music scene at large?
Most of the people are DJing because it’s a very easy way to get your ego out there or because they think it’s hip. Some do it for fun, others do it for money and try making a living with it… Playing music from others is the easiest way to archive fame without the need of a real “talent” with today’s technology.

भ | You’ve also expressed concerns that a lot of influential producers have addressed – music production that was previously dependant on a team of people, all specialising in separate elements of the process, has now become a one-man-show. In the case of, say, an Aphex Twin, it’s happened to work favourably. But globally, the quality of music being released has dropped. What are your thoughts on this, especially considering the pace at which software and hardware is being developed and aimed squarely at the “bedroom producer” market?
An artist like Aphex Twin is there for a long long time and had a fan base as a very well known influential producer. He had to disappear to be able to come back in order to do what does best! But in today’s world, if Aphex Twin wouldn’t be Aphex Twin, the albums or his tracks wouldn’t have got any notice. And that’s a big shame! On the other hand, we have to face it, there are just no new things to discover. Even if they release the “Greatest Synth On Earth”, it won’t make more (music) than any other instrument. It’s all based on melodies and notes that have been there already. And for new artists, that’s a very hard one to swallow… for the old ones too, by the way.

भ | How emotionally connected are you to your past work and how often do you re-visit your earlier productions?
There are productions I’m still amazed of and tracks I really don’t like anymore. Everything was done at a specific time, capturing the emotions of a certain moment. Taste always changes, so I think it’s great to see how an artist is developing over the years. Some do, others don’t… I think that’s what makes a real artist.

भ | What was the inspiration behind and around ‘Lumberjack’, your collaboration with Alan Braxe?
I remember, Alan and me had our first DJ gig together at the Keys Club in London and so we met to go thru some records. It just happened that we started to play around and suddenly lumberjack was there 😉

भ | How do you approach remix work? Is there a signature Kris Menace style-sheet that you draw from when working on other people’s music? How much harder is it compare to doing your own music?
I never work with a scheme and always start everything from scratch. I do what I like, so maybe that’s why my music sounds like me. Generally, I prefer doing own tracks over remix work nowadays, but both sides have their very own challenges. With remixes you are always trapped in expectations and work as a “contractor” for somebody else in a way, while with original tracks, I have more freedom and can mostly do whatever I feel like.

भ | For our gear heads and audiophiles, can you tell us what your main tools are for music production and what equipment you’re using to play live?
As a DAW I use Steinberg’s Cubase. I’m pretty old-school when it comes to production. I use quite a lot of outboard gear, like my Panasonic DA7 mixing desk, a Pultec EQ, SSL compressors for drums, Neve 1176 for recording Vocal, some synths, guitars, bass, Rhode. The less, the better…

भ | When you decided to start your Label ‘Compuphonic’, was it because you wanted to consciously move away from the French house sound Work It Baby had become known for?
I would never name myself a French house artist to be honest. I did so many different styles, because I just love music. Work It Baby is a label I mostly started for friends, who happen to have a “french house” sound. For Kris Menace, I needed a more flexible label. Compuphonic is my little playground where I can do whatever I want. I can release a techno Track, as I love techno, but I can also release a full on pop vocal track, as I love pop music too… I hate to be stuck in one genre. How sad it would be if I would always do the same…

भ | The track names in your latest album The Entirety of Matter suggest something thematic. Were there any concepts that you were toying with when making this record?
The album was produced in a very intense time and every track has its very own meaning. I didn’t had a vision when I started doing the album and just made it. No concept had been there at all, but everything came together very naturally for The Entirety Of Matter when I met Mr. Div.

भ | Mr. Div’s artwork for the record is treat for the eyes, coupled with all those captivating GIF videos. Did you have an idea of what you wanted this to look like when you approached Mr. Div?
When I work with another artist, I never tell him what to do nor do I expect anything. It’s great to see how people differently feel about things. Mr. Div made an amazing artwork with all those great GIFs showing his vision of my tales, which I told him in private. We also just made the very first “Virtual Reality Music Video” with a new company from Germany called Matrix Technologies for The Entirety Of Matter. They developed also a new way of experiencing 3D sound! It’s mind-blowing and a new step into a totally new world!

Stream the entire album plus GIF videos from the playlist below.

भ | Going back a little, Features was quite the critical hit. It was incidentally also your first album that featured vocals. How do you think it stacks up against your previous work? And would you do another vocal album?
I teamed up with Simon Lord to create a new project called Menace & Lord, which we just signed to Warner / We Play. It is fully vocal-based, very pop with lots of love and magic all over. I have also very recently started again working with some vocalists. Let’s see what comes. I really cant tell, as I don’t know… 😉

भ | If you could name three influential records off the top of your head, which ones would they be?
All the stuff from Imagination, Quincy Jones and Kraftwerk really. That’s what my father had brainwashed me with when I was a kid!

भ | You have kids. What understanding do they have of your music and what you do for a living?
I only do music for a living. I write and produce a lot for others and I do some music for TV too. I’ve started in 1993 and for whatever reason I’m still stuck in the business. My kids love music. Both play piano and both are coming in my studio whenever I make music asking how this and that works. They love to try out the synths and to meet all the different artists I record with.

भ | You have a number of projects, all with their own unique charm. Did you grow up around a lot of music? Why and when did you decide to become a producer?
I was very young, around 13 or 14 when I started to do music. I always wanted to create melodies and sounds.

भ | How come you aren’t making more late-night, rave-like Menace tunes? I went nuts when I listened to stuff like ‘Hz and Tones’ and ‘Scaler’.
When you are known for a specific sound, most of the followers don’t understand when you suddenly do a track like ‘Hz and Tones’ or ‘Scaler’ for example. For me Music is universal, so i just do what I like. I still do such tracks if I feel it, but I don’t see a reason at the moment to release them. So I keep them for myself and my rare DJ Gigs.

भ | The Club FG shows were the best when you were hosting them. At one time, they became my main source of music new and old. Would you be keen to start DJing (regularly) on the Internet once again?
I really don’t want to DJ on a regular basis again. I enjoy playing special occasions like the big May Day event in Germany, but otherwise DJ-ing has totally lost its fascination for me since everybody is doing and can do it.

भ | Who is your musical hero?
There are of course a lot of very talented people whose work I admire, but I wouldn’t call any of them my hero. My heroes are the people who helped me being here today where I am.

भ | What have you got planned (musically) for the year 2015?
I recently teamed up with my old friend Lifelike for a new song and a remix for Gorgio Moroder, being part of his new deluxe album. I have also been doing some remixes, for the new Unai single for example and new track named ‘Drastical’ with a friend of mine Vincent Honca, but I’m personally mostly looking forward to the release of our Menace & Lord album called Sun, Moon & Stars on WePlay/Warner Music.

Stay connected with Kris Menace at www.krismenace.com, Facebook and Soundcloud.