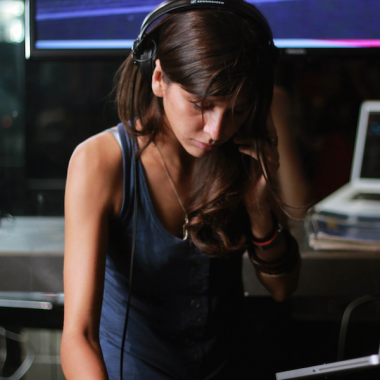 Sandunes Flexes Out This Festival Season

“The Ensemble is definitely Step One towards expanding on my ‘live’ set and creating a way to share some of the music with audiences who relate more to a band.”

In an attempt to tip the scales and further bridge the gap between the interplay of human and machine-generated instrumentation, Mumbai music producer and sound designer Sandunes looks set to expand her compact solo setup into a three-member band that will be known henceforth as the Sandunes Ensemble. The ensemble will make its debut at the Bacardi NH7 Weekender in Pune on November 21-23 (details), and to find out more about this new force, we had a chat with Sandunes about that, her recent trip to the United States for OneBeat and more.

भ | So what is the Sandunes Ensemble trying to create/project in terms of a new experience?
S |  We’re trying to create a completely live dance music experience – solid beats, basslines, etc., but it’s all being played live and raw enough to sit in that sweet spot which I’ve been trying to achieve and now am getting close to with the help of two very adept musicians – Jiver and Brad. We’re going to be performing material that’s mostly unreleased, so it’s a fresh, previously-unseen set. This time, we’re trying to create an experience that’s not going for just knob twiddling fun, which is how I’ve presented most of my music in the past, but something visually engaging as you see exactly what you hear but it’s still electronic and dance music in a larger sense. I’m excited!

भ | Who is in the Sandunes Ensemble? What does each member play?
S | The Sandunes Ensemble features Jivraj Singh (Jiver; of PINKNOISE, Nischay Parekh) on a stand-up electronic drum kit, Bradly Tellis (Brad) from The Colour Compound on guitars and vocals, myself on synths and keys, plus a range of rotating vocalists through the set. The list includes Mink (Saba Azad; of Madboy/Mink), Siddharth Basrur, Nicholson, Rohan Mazumdar and Nischay Parekh.

भ | You’ve been in bands before, for one. On festival stages, you’ve done something in a band set-up as KRUNK All Stars; then there’s the Dualist Inquiry Band, and a lot of other collaborations. What’s different (for you) with the ensemble?
S |  For one, all of the music we’re performing as a band is music that I have written and produced – that’s a first for me. I’ve been wanting to have musicians flesh out my musical parts and haven’t really had a chance to do that before. I’ve also had the opportunity to re-arrange the tracks for live-renditions (as some elements from the studio have been impossible to recreate), so navigating that has been a first too.

भ | You’ve mentioned that you want to move away from playing so many DJ sets. Is the Ensemble one way of working towards that? What else are you doing to consolidate your solo act in that regard?
S |  The Ensemble is definitely Step One towards expanding on my ‘live’ set and creating a way to share some of the music with audiences who relate more to a band. I’ve been working hard at more content and on expanding/beefing up my live set so that even when I’m playing solo, I can play more synths live, and keep it 100% original. I’m hoping there are more gigs with opportunities to explore some of that too.

भ | What does Sandunes Ensemble add to / take away from your regular performance style as Sandunes?
S |  My solo gigs are completely improvised. I have a loose framework, but I never know what direction the set’s going to end up taking. The Ensemble has definitely added a whole load of structure and reconnected me to good habits of playing within that structure. There’s also less pressure now that I can focus on only one or two elements while Jiver and Brad can man different areas of the songs.

भ | Is there a full Ensemble set in the works? Or is this something like a festival jam band?
S |  Nope. Definitely a full ensemble set in the making. We’re working at nailing it at the festival and then hopefully finding more platforms to share this music in this avatar.

A festival anthem and a DJ favorite from last year, Sandunes’ collaboration with vocalist Siddharth Basrur yielded ‘Good To You’. Listen below.

भ | What’s coming up after the Slybounce EP?
S |  A Slybounce remix EP, a ‘Sandunes favourites’-style (bootleg) remix EP, a downtempo EP, a dance EP that’s been sitting on the shelf and waiting for its release to come through, and a couple of exciting collaborative studio projects which are in the pipes too.

भ | Finally, tell us about OneBeat. What did you do there? What did you learn?
S |  OneBeat was an exceptionally eye-opening and mind-expanding musical experience that I was very privileged to be a part of. I spent the first two weeks of OneBeat at an artist residency in California with 25 musicians from 17 different countries and we worked on lots of new music. Then we toured the West Coast and performed all that material at several venues for diverse audiences. We also did a lot of socially-engaging musical collaborations and projects with schools/community centres and with children, where we explored different applications of music within the context of social activism. I learned several valuable things at OneBeat, but mostly I became acutely aware of the potential of music as a medium for social justice and its ability to bridge seemingly un-bridgeable gaps.